Old Orchard Shoal Lighthouse was destroyed by Super Storm Sandy.  This lighthouse stood for over 100 years but all that remains now is the foundation.  I wanted to create a fused glass window of the lighthouse as it once stood.


This fused glass panel was inspired by a photo I found on Flicker.  I would like to donate this panel.


To create this panel I gathered the Bullseye Glass Powders to paint the background.  It is difficult to envision the color the powder will turn after firing in the kiln, the sheet glass below each jar is a reminder.


To paint sky and sea, mix powder with Bullseye Glasstac to make liquid glass and spread with a paint brush.  The clouds were mixed with less liquid to make them thicker and then more powder in different shades was sifted to give them a thicker feel.


To create the lighthouse, the basic shapes were cut from opaque sheet glass.  In the first photo you can see the the fireplug shape.  I added weld lines, railing and shading with liquid glass created by combining Bullseye glass powders and CMC. The third photo shows the layering of glass frits to create the rocky foundation and the spray of water.


This is the Old Orchard Lighthouse Fused Glass Panel after its second firing in the kiln.  I hope this lighthouse is remembered.
Posted by Sharon Warren 1 comment:

Red glass poppies are growing on variegated green glass stems, frozen in an antique window frame.  I have wanted to create this fused glass window for a long time.  I love the crisp cool lines of the glass against the worn wood frame and aged brass hardware.

To create this window I had to find a frame not caked in nasty layers of paint and glazing.  I couldn't so I used this window.  I had to heat the glazing and remove the old glass panes, maybe use them for a future project.  The paint was stripped off with lots of scraping and non-toxic stripping cream.  It seemed to take forever.  But here it is - exactly what I wanted.  I then sketched the layout of the poppies.


After cutting the clear base panels, I cut and ground the red poppy petals.  These flowers were created using different shades of red glass, some transparent and some opaque - even some red streaky Bullseye glass.  Before the first firing, some of the red glass looks barely pink, but after firing this glass will turn deep cranberry - it is a striker glass.

The next step was the stems.  I wanted an organic shape with many shades of green and even some tan.  Starting with 1/4 inch strips of different colors, I heated and combined these strips using my Mega Minor torch.  Each stem was pulled individually.


Now that the stems were created, it was time to arrange and re-arrange the poppy petals and stems until I was happy.  The new layout does not bear much resemblance to the original drawing.  Now for the first firing.  These four glass panels will be heated to 1450 deg F, held for 10 minutes and then cooled slowly.

After the first firing, I added more red glass petals, some liquid glass leaves and 3 ladybugs.  The liquid glass leaves were a combination of dark green and gray glass powders mixed with CMC.  The little ladybugs were created in a separate fusing, adding the dots with my torch.

After the second firing, the four glass panels were set into the antique window frame with clear silicone.  The window hangs from a pair of heavy duty Aanraku roll hooks and brass chain.  This hardware setup feels very sturdy and looks finished. 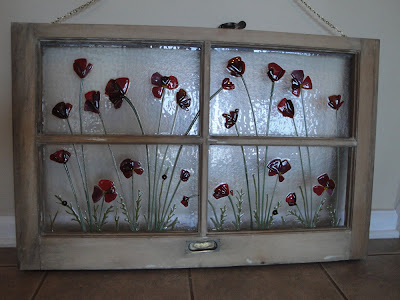 One last photo of a close-up of the fused red glass poppy petals.