We came home from a month of semi-vacation in New York and school is here, today is the first day. Cece was so excited, she woke up at 3 am and then at 4 am and again at 5:30 just chomping at the bit to get ready. She even wanted to stage her leaving for school photo. She decided it would be best by the front door with her bookbag and her book report in a bag and an extra red book (the book because she thought it would look better). 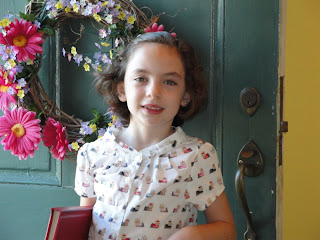 I took these photos with our new Sony Cybershot. We had to buy a new camera because both Canon Powershots stopped working. The new Sony received great reviews on CNET and seems like a great camera, but the photos just seem not crisp - not blurry, but like airbrushed or something. 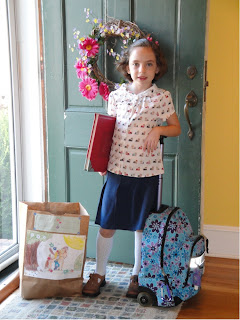 We also took our homemade kayak for its maiden voyage this past Friday. These photos were taken with a disposable camera that truly inspired us to get out and buy the Sony Cybershot. I forgot how annoying it is to not be able to see a preview of your shot on the LCD and how much trouble it is to go and get your film developed. So here's the Yost kayak on the Subaru. 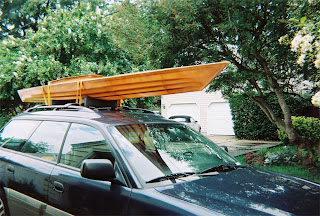 Now for the first test, will it float? Actually, it did and the boat was completely dry inside. I got to try paddling the kayak first. It was so fast compared to the blue banana, our inflatable. It did seem really tippy as I paddled, but I don't really have much experience in any other kayak. 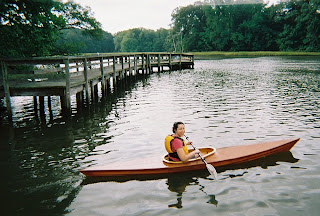 Dirk also took a turn. He had some trouble getting in, but once his legs were stretched out, it looked like he fit. One problem is the foot braces, we placed them so I would use the uppermost setting and he would use the last setting. I was very comfortable, but he felt like he needed more room. I guess that is what you get when you share a kayak with someone a foot taller than you. 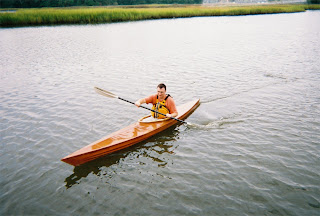